My recovery from a dislocated elbow 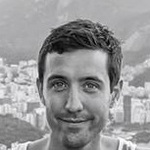 I recently dislocated my elbow and like a lot of people, turned to Google to do some research about the injury. I wanted to find out about the recovery time, treatment options and any exercises I could do to help me back to full health. The research that I did however did not do a lot for my confidence. Countless stories of people who never regained full extension/bend of the affected arm, people who spent months or even years in recovery.

I found little positive information so I have decided to track my progress here. I am not sure what the outcome will be at this stage, but I will post updates over the upcoming weeks/months/years.

It turns out that a dislocated elbow is a very rare injury for the general population. Statistically 6-13 people per 100,000 people will dislocate their elbow each year which is a tiny 0.0001% chance of doing it in any given year. My case was actually the first elbow dislocation that my physio has seen.

An elbow dislocation happens when the bones of the forearm (the radius and ulna) move out of place and become misaligned with the bone of the upper arm (the humerus). It is sometimes common that fractures occur with the bones in the arm due to the stress caused at the point of dislocation. This is most common in the wrist but also the other bones in the arm. The most common cause is a fall on an outstretched arm.

Like most Saturday afternoons I headed to play football (soccer). The difference this time around however was that I was due to leave the field in an ambulance. The incident itself was pretty innocuous. I ran past one man and overextended for the second challenge. I lost my balance, put my arm out to break my fall and as I did, felt a jelly like wobble in the middle of my arm. As I hit the ground I remember thinking, “Oh f*%k, it’s dislocated.”

Once on the floor, the pain began (Pain scale – 8/10) and I was unable to move my arm (at all), this is how I spent the next 1 hour 50 minutes whilst waiting for the ambulance to arrive. Once the lovely ambulance staff turned up they fixed me up with a constant supply of laughing gas and a spot of morphine and popped me in the back of their van (Pain scale – 4/10 – The Verve were wrong). 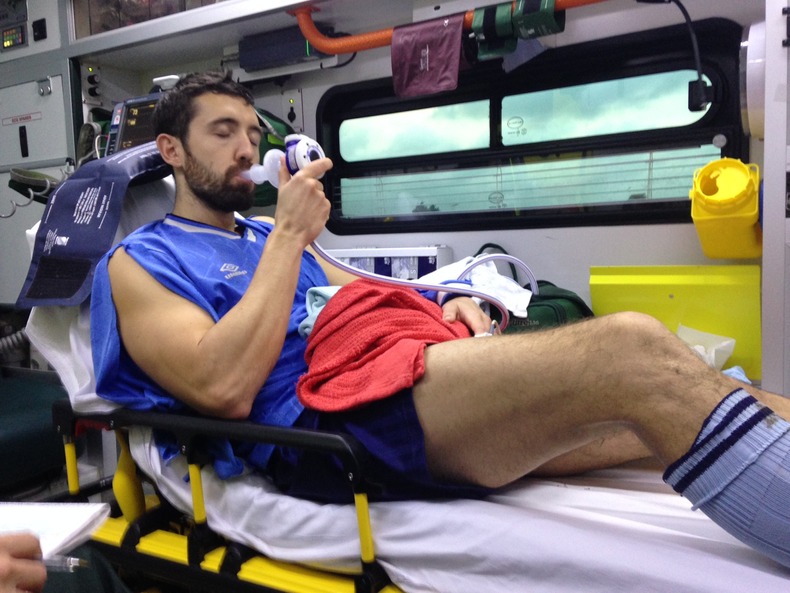 Once at the hospital they performed several X-rays to check all of the bones in the arm and when they established that it wasn’t broken, wheeled me back into resus where the arm was to be put back together (Pain scale – 7/10 – I needed another fix). 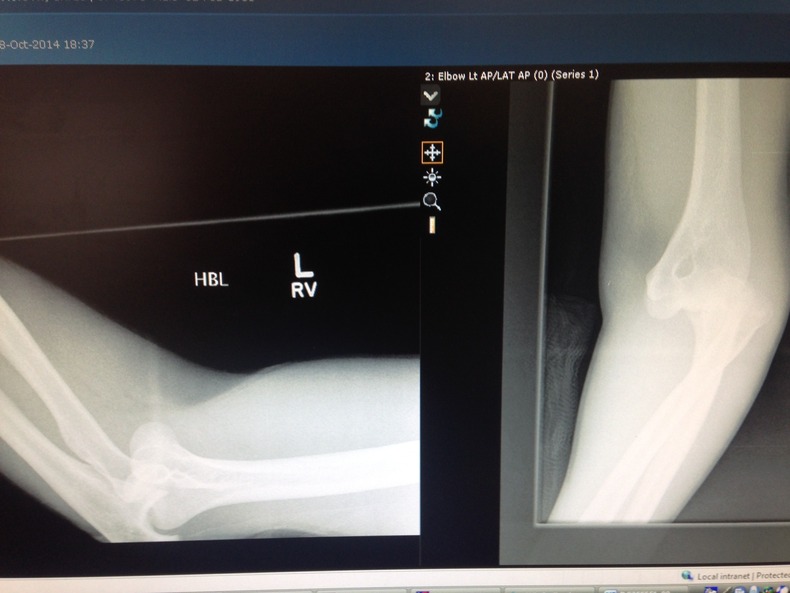 So after receiving another dose of morphine, a team of doctors and nurses set about reconnecting the bones. Now I was a little bit out of it by this point, but it two goes to do it properly and my brother (who I must give credit to for looking after me through this ordeal) said my screams were loud enough to wake the dead (Pain scale – 10/10). 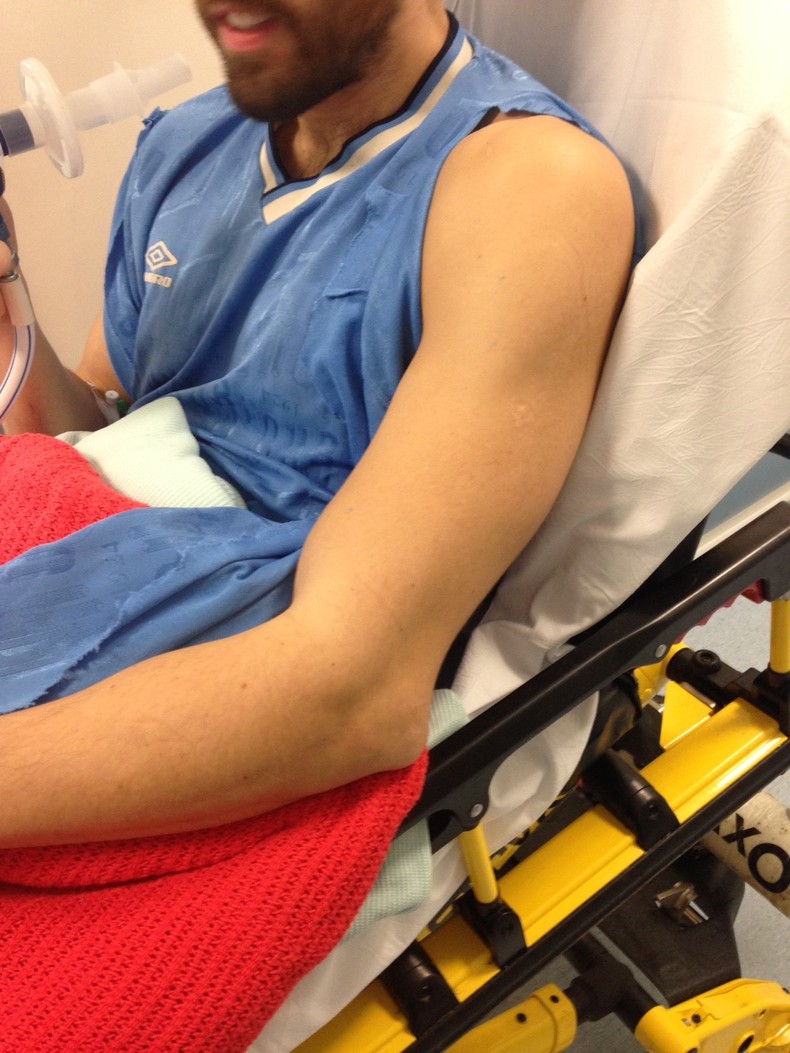 Once back in, a hard set cast was put on to prevent the elbow re-dislocating followed by another X-ray. Then it was parents to the rescue to drive me back to their place. 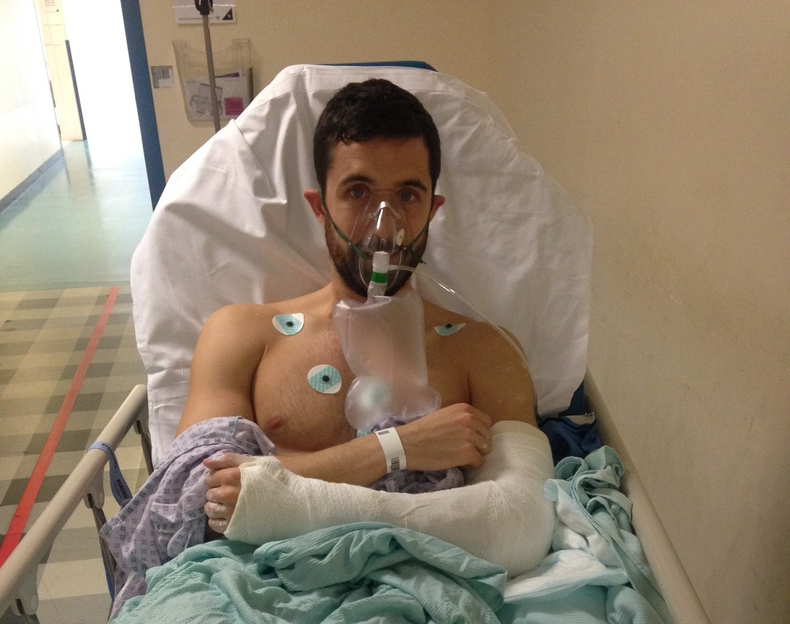 I was put in a hard cast to isolate the joint and make sure that the elbow did not re-dislocate. This is fairly standard practice in the UK although in some countries they do advise against this as it can cause the joint to lock itself in a certain position making recovery difficult. My cast was removed 10 days after the incident and after some basic stability tests I was referred to the physio.

The elbow itself was still very bruised and the muscles around the arm were a funny yellow colour. There was no pain so to speak of just a lot of stiffness and a nervousness about what would happen if the arm was knocked. It was almost impossible to move the arm out of the 90 degree angle in which it had been set but I was advised by the consultant that I would soon have some mobility back. It was a massive relief to have the arm back as it meant I could start getting back to normal.

The predicted recovery time was 4-6 weeks to be able to bend the arm fully and 12 weeks before I would be able to completely straighten the arm.

Between the cast coming off and the first physio appointment, the arm was isolated during the day in a soft sling to prevent it being knocked. I was able to do most things relatively easily if I took a little bit of care. I was even able to get back to the gym and spent 3 nights a week on an exercise bike doing arm isolation exercises to try to relieve the elbow of some of the stiffness.

Physio is absolutely necessary in order to get the full range of movement back so I was pretty excited before the first session. The natural position of the arm was still pretty crooked and although the bruising had gone down since the cast was removed, there hadn't been a lot of other change.

After an initial assessment and questionnaire the physical examination of the elbow began. This included a massage of the elbow tendons, ligaments and also the surrounding muscles. This was perhaps the most painful part as the muscles had become incredibly tight as they became overworked making up for the lack of stability in the elbow itself. We also did some push and pull exercises try to increase the flexibility of the arm. By the end of the session I was missing 20 degrees from full extension and 10 degrees from having it fully bent. I am quite pleased with the progress and am looking forward to the next session.

Physio has been progressing well and I am almost able to fully extend my arm at the end of each session. The arm does however stiffen back up quickly afterwards but the range of motion is slowly improving. I have been going to the gym and doing an hour of exercise each day to try to straighten the arm as much as possible. The advice from the physio is to put as much strain on the arm as it can take without being painful.

As well as using the exercises recommended by my physio, I have also found the following sites useful - PhysicalTherapy, PhysioAdvisor and Live Strong. This Youtube video was also useful in the early stages.

So there is still some stiffness but the good news is that with my palm completely flat, my arm is now straight. With my wrist rotated 180 degrees, I am still missing around an inch in terms of range. But the arm is fully functional and I am not experiencing any pain.

I am back in the gym doing press ups, burpees, pull ups, weights etc. Everything is full impact although at a much lower weight until my strength returns. I even have a personal trainer to help me get back in shape.

So overall very positive, I'll keep working on the rotated wrist straightness in the meantime.

So the good news is that I am able to do all forms of sport without pain. I have been going to the gym to rebuild strength and to work on flexibility and the results have been good. If anything my left arm is now stronger than ever before due to the extra focus on rehabilitating the elbow in early 2015.

Yes it is true to say that if I don't go to the gym for a few days the elbow may feel slightly stiff. But by keeping it moving and doing stretches the effects are barely noticeable. I have achieved full extension as well as rotation and can do press-ups, burpees, hand-stands, heavy weights etc.

My advice would be to have physio on the arm as soon as possible, do exercises to build up strength, get into a gym to work with light weights building up to hanging and last of all stay positive. Oh and it probably isn't sensible to play football. If anyone needs a pair of size 10 football boots, I have some going.

If any readers are based in London, I would absolutely recommend my PT Nat who helped me in the gym with recovery. She too has broken and dislocated her elbow so understands exactly what it is like and knows the best exercises to aid recovery. Her website and contact details can be found here.